The following article is from the next edition of SJU magazine, which is expected to hit mailboxes later this month.

How far is Chefornak, Alaska, in Collegeville, Minnesota, geographically and culturally.

But Moses Wiseman ’23 said a common bond connects the small Alaskan village and the new home he found at Saint John’s University.

“I really like Alaska,” said Wiseman, who grew up in a village of 418 in the Yukon Delta near the Bering Sea. “A lot of that comes from the Indigenous culture that I grew up in.

“Indigenous values ​​may differ from culture to culture, but we as Indigenous people try to take care of each other. We can see people who are different from us, but we still care about them and try to make sure they belong. And I think that ties in very strongly with the Benedictine values ​​that we have here in Saint John’s.

“The whole ‘Minnesota Nice’ thing, and that real sense of community that you find in Saint Ben’s and Saint John’s, is such a wonderful thing.”

Wiseman is far from the only student from Alaska to have found a second home at CSB/SJU. Over the past 10 years, a total of 38 students from the state known as “The Last Frontier” have enrolled at the two schools — including four who, like Wiseman, identify as American Indian or natives of Alaska.

This includes a maximum of seven students in the incoming freshman class in 2017 and six each in the freshman classes of 2014, 2018 and 2019. The numbers have declined over the past three years as COVID-19 has kept the CSB/SJU admissions representatives to travel to Alaska.

“Coming to Minnesota and attending Saint John’s provided me with an educational opportunity that wasn’t available in Alaska,” said Nevin Vincent ’22, who grew up 42 miles northeast of Anchorage in Palmer, in Alaska and graduated from Saint John’s in May with degrees in political science and history.

Vincent just completed his fourth summer fighting wildfires with the Forestry Division of the Alaska Department of Natural Resources.

“I was able to improve as a person,” he said.

Tom Voller-Berdan, Senior Associate Director of Admissions at CSB/SJU, has been responsible for recruiting Alaska for several years. He worked with Wiseman and Vincent as they made their college choices.

“We had students from Alaska before that, but he really laid the groundwork,” Voller-Berdan said. “He had a cousin who lived in Anchorage and he had a passion for the place. He loved it there.

Voller-Berdan said the fact that Alaska has only a few four-year colleges means many high school students are willing to look elsewhere — and Saint John’s and Saint Benedict are catching their attention.

“There’s a college fair circuit in Alaska, and during my years traveling there, we were the only school that wasn’t like the others,” he said. “With the exception of the big college fair in Anchorage, which usually had about 150 colleges represented, the others were all around 35.

“Pretty much all of these schools were located in the Pacific Northwest. As a Midwestern school, we really stood out by being there.

Although Alaska is the nation’s largest state by geography, Voller-Berdan said it’s small enough by population for positive word of mouth to spread.

“It’s really about making the right connections,” he said. “Once a few kids come in and have a good experience, it helps build a bridge to others.”

Wiseman said being in Saint John’s helped him develop his voice. In addition to playing for the Men’s Volleyball Club, he also helped establish the CSB/SJU Native Student Association, which allowed him to work on issues he is passionate about.

“When I came here, I wasn’t as vocal as I am now,” he said. “But I always knew what my voice was. I always knew I had the power to change things and I love that about me.

After graduating next May, Wiseman would like to enroll in an accelerated nursing program. After that, he saw himself returning to the Yukon Delta to help serve his people.

The village where Wiseman comes from, Chefornak, is not connected to any main road. It is mainly accessible by plane, boat or, in winter, by snowmobile. Getting used to the different vehicles he sees every day at SJU took some time. 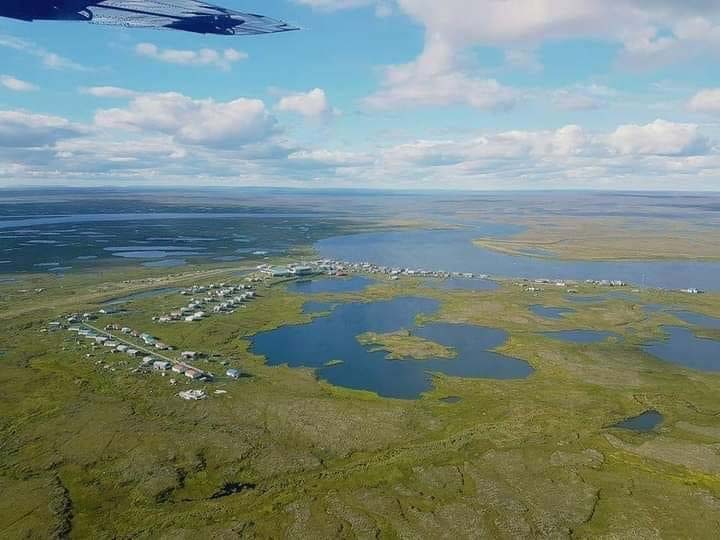 Wiseman’s hometown of Chefornak, Alaska (pop. 418) is only accessible by plane, boat or – in the winter – snowmobile.

“Growing up in my village, the only time I saw cars was when we had to go to the hospital for appointments (about a 45 minute bush plane ride). I saw cars in movies and thought “Oh my God, I want one like this!” When you are a child, you dream. So coming here and seeing so many different cars on campus has been crazy,” he said.

“Our diet is also very different from the Western diet,” Wiseman said. “We mainly live off the land. Seal is one of our many dishes. Fish, moose and birds. And the plants. We forage a lot. It’s really different too.

“We mostly speak our native language there,” he continued. “The only place we spoke English was at school. The teachers we had in our school were mostly from the Midwest. Most of them would end up leaving after two years due to loan cancellation. So I was in contact with people from that part of the country.

Wiseman said Saint John’s first crossed his radar thanks to his cousin, Regina Therchik, with whom he attended first-grade boarding school at Mount Edgecumbe in Sitka.

“I first heard about Saint John’s in my freshman year and was very intrigued by its appearance,” Wiseman said. “They had a men’s volleyball club and volleyball is something that has really helped me over the years. I also liked the nursing program here, too. The influence of my cousin who comes here has helped me a lot.

“I asked her if she liked it and she did.”

Wiseman said he couldn’t have done the Saint John job without the scholarship he received. He is the eighth of 11 siblings. Her father helped build houses and her mother is a preschool teacher in their village.

“Coming from a family whose socio-economic status is low-income poverty, I am so grateful to have had this opportunity and to have obtained these scholarships,” Wiseman said. “That was really the most important factor in my decision to come here.”

Vincent said scholarships also played an important role in his decision to enroll at SJU.

“I am extremely grateful for the scholarships as they allowed me to continue my studies without these major financial constraints,” he said. “My summer is limited to a few months working as a wildland firefighter in Alaska. What I earn is immediately used to continue my studies here at SJU. My parents continued to support me throughout the process, drawing on their retirement to help me complete my education.

“Receiving these scholarships eased some of my financial pressures in the future.”

Having that peace of mind was important when Vincent worked in the field to contain the raging wildfires.

“There are times when it can get a little scary,” he said. “But it’s rewarding because you know what you’re doing has a significant impact on the course of the fire. You protect people, lives and property.

Vincent also had the good fortune of working as a cadet with the Saint John Fire Department, which gave him a very different experience.

“It’s been a good experience because on-campus calls are much more residential in nature,” he said. “There are a lot of smoke detectors from people who have burned something while cooking, and there are medical calls. But we still have to prepare for the fires.

“My sophomore year in the fall of 2019, someone threw a grill in the dumpster by the baseball field and it caught fire. It started smoldering and eventually the whole dumpster caught fire.

Minnesota winters can sometimes seem harsh to those traveling from out of state. They don’t seem that important to Wiseman and Vincent after growing up in Alaska.

In fact, they said, the weather was one of the selling points. Voller-Berdan offered to fly Vincent to Collegeville for a visit after the two met at a college fair.

“It was mid-February and it was really cold and snowing quite heavily,” Vincent said. “But it didn’t bother me because it reminded me of the weather back home.

“I was amazed by the campus, though – the Arboretum, the banner of the Abbey Church bell, the Abbey itself. I love history and there was so much to discover here,” Vincent said.

“The climate is really similar to Alaska,” Wiseman added. “That’s one of the reasons I really liked this place.

“Staff and administration also did their best to make me feel involved. It wasn’t always the easiest fit coming from where I come from. There were a lot of things I had to get used to. So I really appreciated that they went out of their way to help.

Vincent and Wiseman wouldn’t trade their Saint John experiences for the world.

“I discovered a lot about myself here,” Vincent said. “I discovered my passion for history and political science. I have always had a passion for serving the community around me. But that’s something that’s really emphasized here.

“More than anything, however, if I hadn’t come here, I would have missed being part of this community. I have made so many friends here and cultivated a support network. These are things that last a lifetime.

“I really feel like the community of Saint John’s has helped guide me as I come to understand exactly who I am,” added Wiseman. “I’ve discovered passions here – things I want to fight for, different people and marginalized groups I want to stand up for.

“I’m sure I could have developed some of that elsewhere. But being in Saint John’s gave me very strong roots to grow on.